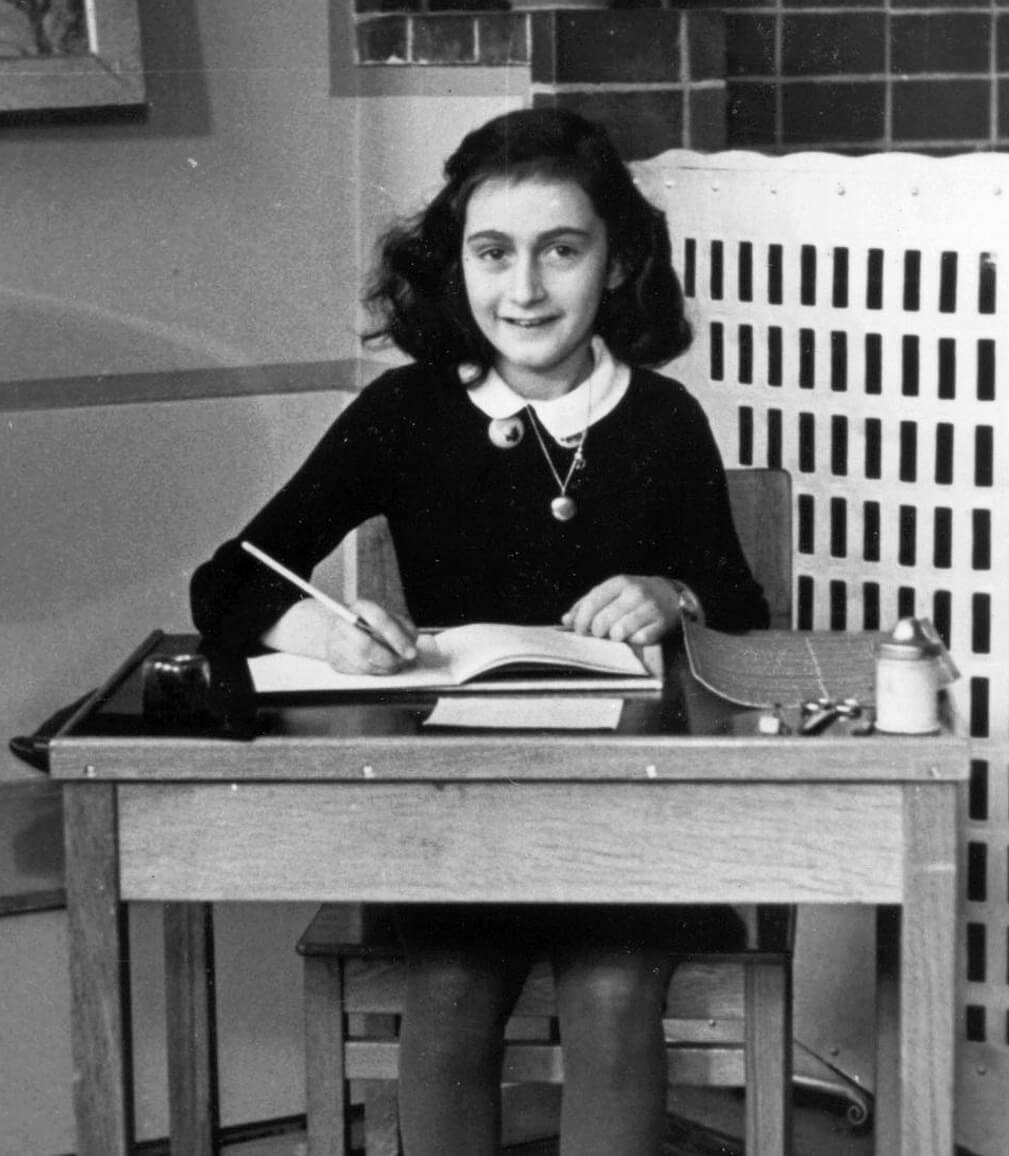 Anne Frank was a Jewish girl who published her diary about her experiences of hiding from the Nazis in Holland. She died in a concentration camp in Germany in early 1945, after being discovered and kidnapped by the Nazis, along with the rest of her family. Only her father, Otto Frank, survived. He was the one who was determined to get her diary published.

Anne Frank was born on the 12th June 1929 in Frankfurt, Germany. After the Nazi’s rise to power in 1933, Anne’s father didn’t see a bright future for his family in Germany, due to the Nazi’s policies against those who were Jewish. And so, in 1934, they moved to Amsterdam, Netherlands where Otto had started a company.

But in 1940, a year after Britain declared war on Germany, the Nazis invaded the Netherlands and five days later, the Netherlands surrendered. The Nazi regime took over and started rounding up Jews.

On the 5th July 1942, Margot, Anne’s older sister, received a letter saying that she must go to a labour camp in Germany. Anyone who didn’t go to the labour camps would be arrested. Otto and Edith, his wife, knew that this day would come, and had been planning to go into hiding on the 16th July. But because Margot had received this letter, they decided to do it the very next day.

A day after Margot received the letter, the family went into hiding in an annex in Otto’s business offices. They told their neighbours that they were fleeing to Switzerland. They left their house in a mess to make it seem like they were in a hurry.

From the 12th June 1942 until 1st August 1944, she kept a diary. She used a journal that she had been given for her 12th birthday. The first thing that she wrote into her diary was this:

She used her diary to write down what was happening in her life, and describes the moment when she first found out that her family would go into hiding:

A few days ago, as we were taking a stroll round our neighbourhood square, Father began to talk about going into hiding. He said it would be very hard for us to live cut off from the rest of the world. I asked him why he was bringing this up now.

“Well, Anne,” he replied, “you know that for more than a year we’ve been sending our clothes, food and furniture to other people. We don’t want our belongings to be seized by the Germans. Nor do we want to fall into their clutches ourselves. So we’ll leave of our own accord and not wait to be hauled away.”

“Don’t you worry. We’ll take care of everything. Just enjoy your carefree life while you can.“

Life inside the Annex

The family hid inside the Annex for 761 days. Those inside it had to stay quiet for some parts of the day, otherwise those working below them would know that people were hiding above them.

The room where Anne and her family were staying was hidden behind a thick bookcase.

Electricity was rationed (not just in the Annex, but in the whole country) and anyone who exceeded their ration would go without it for two weeks. During some parts of the day, they had to be cautious about the noises they made because of the workers below, who did not know who was living above them.

Anne Frank found Sunday the most miserable day of the week. She said in her diary:

I wander from room to room, climb up and down the stairs and feel like a songbird whose wings have been ripped off and who keeps hurling itself against the bars of its dark cage.

“Let me out, where there’s fresh air and laughter!” a voice within me cries. I don’t even bother to reply any more, but lie down on the divan (a long, backless sofa.)

Sleep makes the silence and the terrible fear go by more quickly, helps pass the time, since it’s impossible to kill it.

Sometime between 10am and 10.30am, on the 4th August 1944, a car pulled up near the Annexe. In the car was an SS sergeant, along with three members of the Dutch police. They arrested the eight people hiding there, and took all of their valuables and cash that they could find. Once they were arrested, they were first taken to a prison in Amsterdam. They were then taken to Westerbork, where they would be sent to Auschwitz in Poland.

At the end of October 1944, Anne and Margot (her older sister) were sent from Auschwitz to Bergen-Belsen camp near Hanover in Germany. In the winter of 1944-5, there was a typhus epidemic, which was caused by the terrible hygiene conditions at the camp. The disease killed thousands of people, including Margot and Anne. We don’t know the exact date Anne Frank died, but many say that it was around late February/early March.