Marie Antoinette and Louis XVI were responsible for the revolution.

Marie Antoinette was sent over to marry Louis XVI in April 1770, at the very young age of 14. She then became the Dauphine (literally meaning “dolphin”) of France. 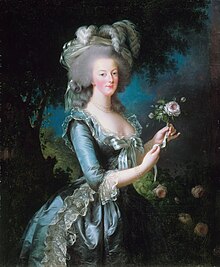 A picture of Marie Antoinette holding a rose.

The causes of the revolution

There are many causes of the revolution, all of which directly lead back to Marie Antoinette and Louis XVI.
One of the many causes was due to the Caste System (a system they had in France to rank everyone of their status.)

Here’s a diagram to explain who paid taxes and who didn’t:

Another cause of the revolution was the fact that Marie and Louis were driving the country into bankruptcy. Marie had an addiction for gambling, as well as partying late into the night.

They spent all the countries’ money on their own luxuries. The storming of the Bastille, which was a prison, was the start of many terrible things to come. Marie and Louis eventually tried to escape, but their attempt failed.
Eventually, on the 16th October 1793, Marie Antoinette and Louis XVI were executed. But the revolution had only just started.

A group of people, also known as Revolutionaries, started chopping heads off the supporters of the King and Queen, and then, pretty much everyone who disagreed with them.

As soon as the King and Queen were executed, everyone displayed savage behaviours. Now they had no King or Queen, they did not know what to do. One girl even had to drink a glass of blood or she would be executed!
Eventually, the head of this group of people was executed.
Napoleon Bonaparte eventually became Emperor of France, which is pretty much exactly the same thing as a king. They lost the monarchy and gained an emperor.