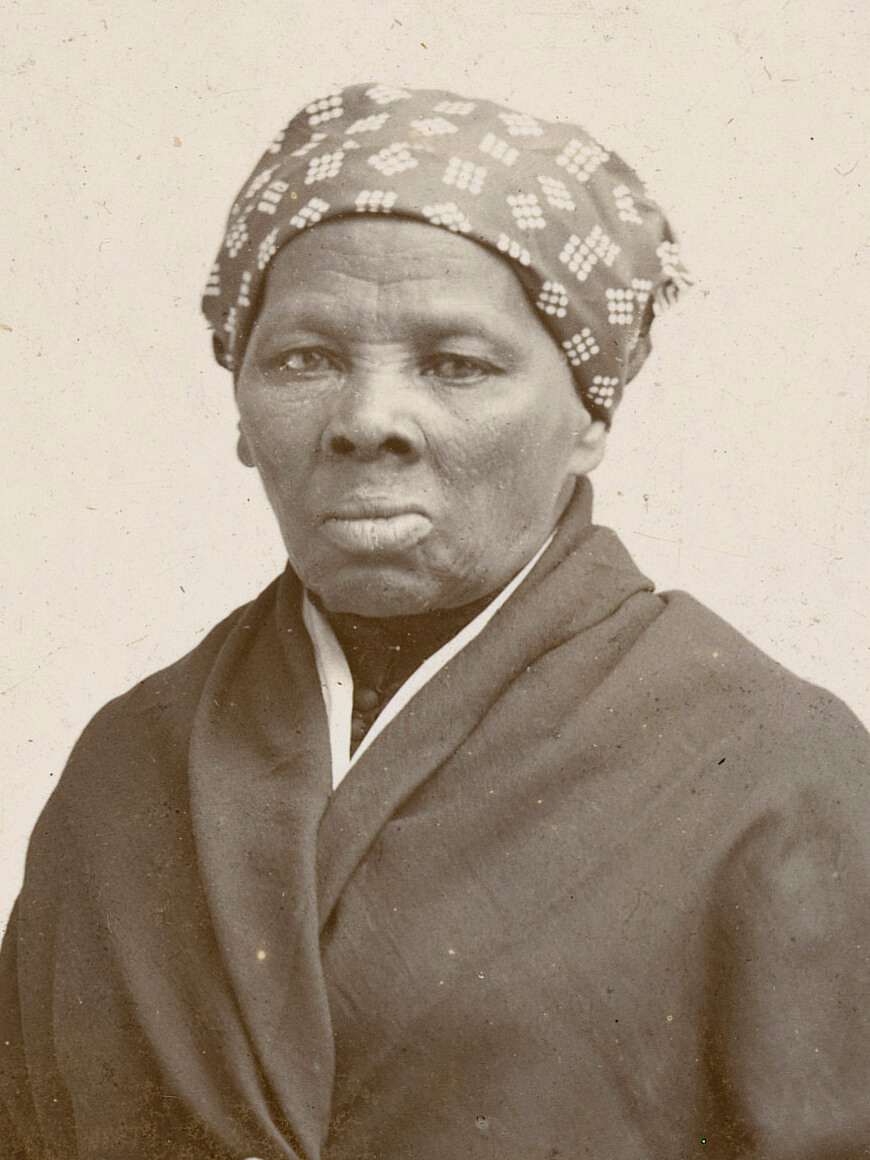 Harriet Tubman was a political activist that campaigned for slavery to become illegal in the United States. She was born into slavery and escaped, rescuing 70 enslaved people from their captors. During the Civil War, she helped the US Army at various points as a cook, nurse, armed scout and a spy.

Harriet was born into slavery in March 1822 at Maryland. As a child, she was beaten by the slave owners.

Between the ages of 10 and 15, she suffered a severe head injury that would affect her for the rest of her life. After her injury, she began experiencing strange visions and vivid dreams, which she thought were messages from God. Although she couldn’t read, she was told Bible stories and probably attended a church with her family.

In 1840, Anthony Thompson’s son followed through a promise his dad had made to free Harriet’s father when he was 45 years old.

Around 1844, Harriet married a free black man called John Tubman. Marriages between free and enslaved people were common in Eastern Maryland. After her marriage, she changed her name from Araminta to Harriet.

But in 1848, she became ill once again, which decreased her value as a slave. Her owner tried to sell her, but he couldn’t find anyone willing to buy her. Harriet was angry at him for trying to sell her and enslaving her relatives. Later in her life, she said:

I prayed all night long for my master till the first of March; and all the time he was bringing people to look at me, and trying to sell me.

When a buyer had been found, and the sale had nearly been completed, she said that she changed her prayer:

I changed my prayer. [On the] first of March I began to pray, ‘Oh Lord, if you ain’t never going to change that man’s heart, kill him, Lord, and take him out of the way.

A week later, her owner died, and she said she regretted wishing death on her owner.

With her owner’s death increasing the likelihood of her family’s separation, Harriet and her brothers tried escaping on 17 September 1849. But her brothers decided to go back after a $100 reward for their capture was posted in a local newspaper. Harriet had to return with them.

Harriet tried escaping again, but without her brothers. She tried to let her mother know and a friend know of her plan. She used a network called the Underground Railroad, a series of routes and safe places that were used by enslaved people trying to escape to states where slavery was illegal and Canada. She had to travel at night, using the North Star and trying to avoid “slave catchers” – people who would capture slaves and turn them in for a reward.

When she crossed into Pennsylvania, a state that had banned slavery, she said she felt relieved:

When I found I had crossed that line, I looked at my hands to see if I was the same person. There was such a glory over everything; the sun came like gold through the trees, and over the fields, and I felt like I was in Heaven.

When she reached Philadelphia, Pennsylvania, she worked and saved some money. Later on, Harriet said that she missed her family and wished that they could be free, like her.

In late 1850, Harriet was told that her niece and two children were going to be sold on as slaves in Cambridge. Her niece’s husband won the bid for his wife. During a lunch break, the two children escaped to a nearby safe house. That night saw her niece’s husband took the family 60 miles with a log canoe to Baltimore, where Harriet met them.

In 1851, she went back to Maryland to rescue several other family members, including her husband. She saved money from various jobs to buy a suit for him and make her way south. But he had married another woman, and said he was happy where he was.

When the American Civil War broke out in 1861, Harriet knew that a United States victory would be a big step in abolishing slavery. She wanted to help the United States win the Civil War.

During the war, she served as a nurse, preparing herbal remedies and treating soldiers from dysentery. At first, she received rations from the US government, but some people thought that she was getting special treatment, so she gave up those rations and made money selling pies and beer instead.

In late 1863, she was the first woman to lead an armed assault in the war on a group of slave plantations. As she saw the slaves run towards the steam boat was in, she later thought that she had never seen anything like it.

For the rest of the war, she worked for the US forces, looking after liberated slaves, scouting Southern territory and nursing soldiers.

Harriet spent the rest of her life in Auburn, Alabama. She kept on doing charity work, which kept her in constant poverty, and she had trouble getting a government pension. Harriet also experienced being scammed and treated differently because of her skin colour.

But by 1911, her body had become frail, and she was moved into the care home that she had opened herself just a few years earlier. A newspaper in New York said she was “ill and penniless”.

Harriet Tubman died of pneumonia in 1913. But before she died, she told her surrounding friends and family:

I go to prepare a place for you.