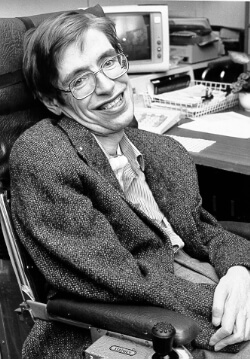 Stephen Hawking was a scientist and a mathematician. He was born into a family of doctors, and started studying at Oxford University at 17 years old.

In 1963, a year after he started taking his degree, he was diagnosed with a slow-progressing form of motor neurone disease, a disease that makes it more difficult for the person to speak, move certain muscles and, eventually, breathe. Most people who have it only lived for 2 to 4 years after diagnosis. Stephen Hawking lived for 50 more years after being diagnosed with the disease, dying in 2018 at the age of 76.

Throughout his life, Stephen Hawking came up with many scientific theories that explained how physics and the universe worked. One of these theories was that black holes emit radiation. At first, some people were sceptical about the theory, but by the late 1970s, many people saw it as a breakthrough in physics.

Another scientific theory Stephen came up with was a way to measure the bending of incoming and outgoing rays of light using a maths formula.

Planning to go to space

In an interview for the BBC in 2006, Stephen said that one of his greatest desires was to go to space. One of the reasons he said he wanted to go into space was to show what people with disabilities could do.

On 26th April 2007, Stephen went on a specially-modified plane to see if he could withstand the forces involved with travelling into space. At first, people thought that he would be uncomfortable, but this turned out not to be the case. He said after the flight:

It was amazing. The zero-G part was wonderful and the higher-G part was no problem. I could have gone on and on. Space, here I come!