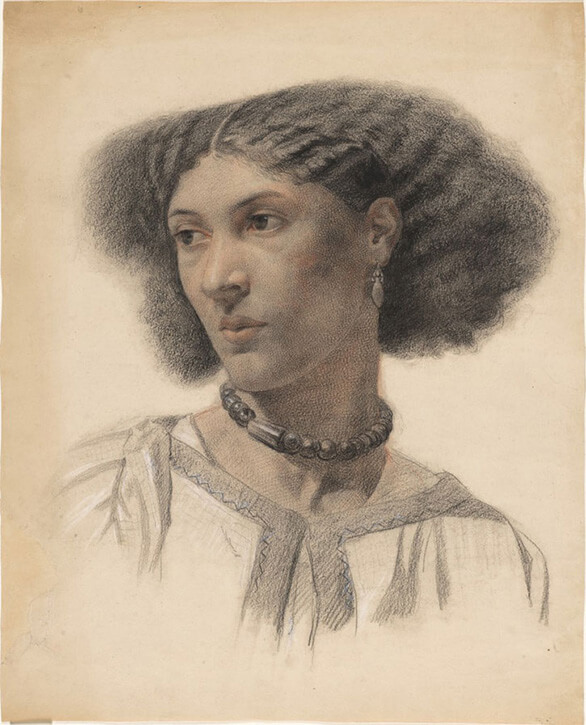 Fanny Eaton was an artist model and domestic worker. She was born in 1835 in Jamaica and died in 1924 in the UK. She was well-known as a model for a group of artists called the Brotherhood.

Fanny was born in Jamaica on 23rd June 1835. Records say that she was a mixed-race woman. In 1834, slavery was abolished in the British colonies, but an apprentice clause meant that slaves could be kept for another 6 years. This clause was outlawed in 1838. In 1840, Fanny and her mother left Jamaica for Britain.

As well as being a domestic worker, Fanny also became an artists’ model. An artist’s model is someone who is paid to appear in an artist’s painting. She did this because she wanted to add to her salary as a domestic worker so she could support her children.

Fanny was noticed by the Brotherhood, a group of artists who liked medieval art. Medieval art usually has a lot of detail and complicated images. This is because the shape of her face was pointy and because she was very thin.

Her family and later life

Fanny married James Eaton, a horse-cab driver, in 1857. Together, they had 10 children before he died in 1881. By this time, Fanny had become a seamstress. Several years later, she was working for a wine merchant as a cook. In 1911, records say she was living with her children in Hammersmith.