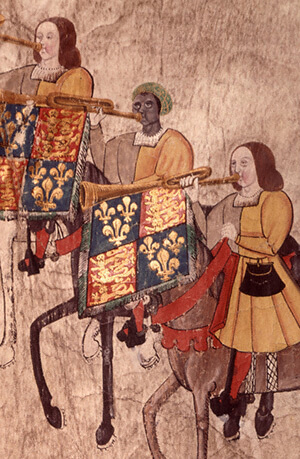 John Blanke was a musician for the Tudor royal family. He is one of the first recorded black people to come to England after the Romans left. Some historians think that he is an African descendant of Katherine of Aragon.

We don’t know much about John’s life, apart from he was paid 8 pence per day by King Henry VII and King Henry VIII. He was present on a painting of a tournament to celebrate the birth of Henry VIII’s son in 1511, who died weeks later. A child dying weeks after they were born was common in Tudor times.

When Henry VIII came to the throne in 1509, John managed to get a pay rise to 16 pence.